Does Cold Brew Coffee Have More Caffeine than Hot Coffee? 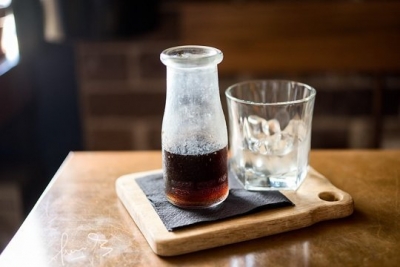 You know what's great about this time of year? It's cold brew coffee season. Easy to drink and addictively refreshing, it's no surprise that cold brew has become a summer drink of choice for many.

Cold brew is different from traditional iced coffee — which is just hot brewed coffee poured over ice — in that it's made by mixing coffee grounds and cold water and letting it sit for a much longer extraction time. But does cold brew coffee have more caffeine than hot coffee?

When it comes to caffeine, temperature plays a big role

"Caffeine's solubility is primary driven by temperature, such that at higher temperatures, significantly more caffeine will dissolve in solution than at cooler temperatures," says Joseph Rivera of coffeechemistry.com

"If you are using the same brew-to-water ratios, the cold brew will definitely have less caffeine than hot."

In other words, you extract more caffeine when you brew coffee with hot water.

But it's not that simple

Here is where things get a little bit complicated, and the answer to "Does cold brew coffee have more caffeine?" isn't exactly straightforward.

"One thing you need to consider is that cold brew coffee typically uses a much higher coffee-to-water ratio, anywhere between 2 to 2 1/2 times more," says Rivera.

"So, even though there is less caffeine extracted with the cold brew [method], the higher coffee-to-water ratio may compensate for this difference in solubility, and you may have a cold brew with equal, if not, more caffeine (although this is unlikely)."

And of course, temperature (and amount of coffee) aren't the only things that will affect your coffee's caffeine levels. "There are a number of variables, including time, temperature, grind size, flow rate (how fast water flows through grounds), contact time, and coffee type (arabica vs. robusta)."

Which means that if you are trying to consider how much your coffee brewing is affecting your caffeine levels, you have a lot to think about.

But let's be honest — if you were that concerned about your caffeine intake, you wouldn't be drinking coffee in the first place, now would you?