Coffee has a long and varied history and historians are not exactly sure where coffee began before being spread across all part of the world. But there is strong evidence to suggest that coffee originated in the mountains region of Abyssinia, or current day Ethiopia, some over 2,000 years ago.

The coffee tree is technically not a tree, but rather a evergreen shrub belonging to the Rubiacea family which contains over 500 genera and 8,000 species individual species.

But of the many species of coffee, only two are of economic importance - those belonging to Coffea Arabica and Coffee Cenephora, or more commonly known as Robusta.

Globally, Arabica accounts for roughly 75% of total world production, while Robusta the remaining 25%.

The majority of the coffee cultivated worldwide is concentrated within ten degrees north and south of the Equator in an area known as the ‘Coffee Belt’ (see below).

Arabica being tropical in nature, requires that the plant receives 1,200-2,200 mm of rainfall per year and grown at an ambient temperature of 15°-24°C. Depending on the species, coffee plants can grown to a height of 2.5-4.5 meters, though shrubs are typically pruned to 2-2.5m for easier harvesting.

Typically three to four years after planting we begin to see the formation of delicate blossoms and the scent of jasmine permeate the air. The blossoming usually occur after several episodes of rainfall and last only three days to four days.

After about six to nine months later, these blossoms become what is to become the tree's fruit (cherry). 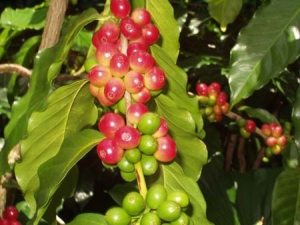 The fruit begins as a green cherry which eventually ripens and changes to a deep red color at full maturation. These cherries are harvested and subsequently processed to transform what we call coffee today.

Interestingly, a typical coffee plant will only produce one pound of roasted coffee in a full harvest year.

More in this category: Anatomy of a Coffee Bean »
back to top