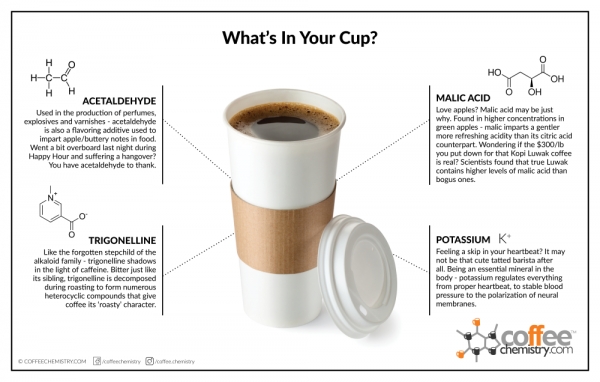 In this second issue of “What’s In Your Cup” we delve into some of the more obscure compounds in coffee. Here is a brief look at four important compounds commonly found in your cup of Joe.

Acetaldehyde or technically known as ethanal is a common raw material used in the production of perfumes, explosives, lacquers, and room odorizers.  Although surprising, it is also widely used as a flavoring agent in the food industry for products requiring a bit of boost in apple/buttery notes.

Trigonelline or the less commonly known alkaloid is also an important component in coffee. Present in low concentrations it begins to decompose at 180°C to form a number of heterocyclic compounds that give coffee much of its ‘roasty’ character.

Malic acid or commonly known as ‘apple acid’ is also an important acid not only in coffee, but in a number of agricultural product as well. Green apples contain higher concentrations of malic acid with red apples containing significantly less.

Potassium is unlike other compounds in that it is an inorganic mineral found in both Arabica and Robusta coffee. Biologically potassium plays an important role in humans responsible for regulating heartbeat, blood pressure as well as the neurological connections between synapses within the brain.

Now you can order this poster in our online shop. 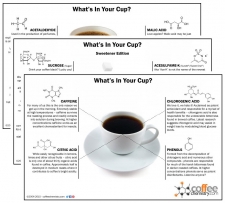