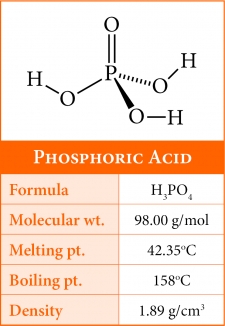 In coffee there are over thirty organic acids with perhaps the most common consisting of citric, malic, acetic, quinic, etc. But there is another branch of acids, namely norganic acids , that deserved special recognition, of these phosphoric acid plays a particularly important role.

In coffee, phosphoric acid makes up roughly less than 1% of coffee's dry matter and is believed to originate from the hydrolysis of phytic acid from the soil. However, unlike some of the other acids - phosphoric is by far the most potent and can easily be 100 times stronger than other acids. As such, many researchers believe that phosphoric acid plays a significant role in coffee's perceived acidity.

Although the argument is well backed, there is some debate over how much phosphoric acid actually contributes to acidity. Those one side say that because phosphoric acid’s potency it has a much greater potential at contributing hydrogens and affecting ultimately acidity.

While those on the other side state that phosphoric acid, though potent, is neutralized by an equal amount of potassium in coffee. A 1999 study conducted by J. Rivera of the Coffee Quality Institute found an inverse relationship between perceived acidity and phosphate concentration. Further studies are needed to further establish a clear role between organic/inorganic acids and their role quality.

Interestingly higher levels of phosphate have been documented in both dry processed robustas and arabicas but their role in perceived acidity still remains a mystery. Though wet processed arabicas do tend to contain the lowest phosphate concentrations this is partly see due to leeching of minerals during fermentation.

It has also been documented that residual amounts of phosphoric acid survive the roasting process with an estimated figures listed in the Table below. The increase in phosphoric acid at higher roasting levels is still not understood and may be due to artifacts produced during the analytical process – as such further studies are needed.

Phosphoric acid is one of the four acids used for the Matching Pairs exam on the Q-grader examination. If you are preparing for the Q-grader certification we highly suggest you practice using our organic acids kit before the exam.

For those wishing to gain a better understanding of how acids work in coffee - we suggest you enroll in our Coffee Science Certificate (CSC) seminar.

More in this category: « Acetic Acid Chlorogenic Acid »
back to top