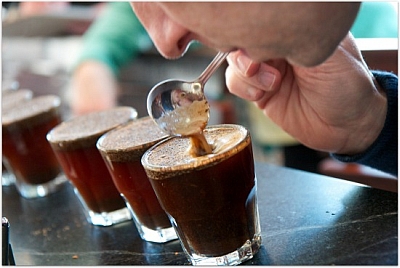 The practice, however, is subjective and subject to the likes and dislikes of potential buyers, but it is nonetheless the de facto practice when discussing coffee quality. Typically cupping is performed in both producing and consuming countries, at times before and after a shipment of coffee arrives at its destination.

Any serious coffee buyer should take the time to invest in setting up a cupping lab. Although not difficult to setup, the lab should be in a clean, well-lit area, free of excessive noise. Below is the lists of some basic equipment needed for any lab.

Much like learning a new language, cupping is a ritual of its own and as such has its own set of terminology. Understanding what these terms mean, along with the repeated practice, will set you on the right path towards becoming a competent cupper. Although the terminology is relatively straight forward, you will see that many terms differ in meaning from country to country.

Now that we have defined the cupping "language" lets move on to the actual form. Within the coffee industry you will see a number of cupping forms in use, each taking bits and pieces to form their own. But within the specialty coffee world, the de facto standard is the SCAA's Cupping Form.

Revised in the early 1990's, the SCAA cupping provides cuppers with an objective way of capturing some of the most important sensory aspects in coffee. The form, which is broken up into ten parameters, allows panelists to rate and penalize for any defects found in the cup(s). The system is based on a 100 point scale, thereby allowing for the classification of very low quality "Off Grade" coffees to "Super Premium Specialty" coffee. According to the system, any coffee which has passed physical grading and cups with a score over 80 points is considered "Specialty" grade. Figure 1 below illustrates the SCAA Cupping Form. 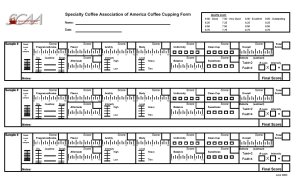 Now that we've covered the basics in cupping theory, let’s get the coffee samples ready. The first step is to ensure that the coffee to be "cupped" is of a light to medium roast. Typically a small sample roaster is used as these roasters provide for greater control and consistency with minimal use of samples. Roast the coffee to a light to medium roast, typically corresponding to an Agtron value between 55-65. The SCAA specifies an Agtron value of exactly 58 for whole bean (+/- 1 pt), but as long as you are within this range, you are fine.

For those without access to an Agtron, the SCAA sells color discs that serve as great points of reference during roasting. It is imperative that a coffee is not roasted past a medium roast, as important flavor notes and potential defects can easily get masked - obviously defeating the point of cupping. All coffee used should be freshly roasted with no more than 24-48 hours in age, be uniform in color, air cooled, contain no quakers, and have no scorching or tipping present on the bean.

Once the coffee has been roasted allow it to rest overnight in a clean area. Weight out approximately 12-12.5g of coffee per cup - this will vary depending on the size your cups, but as long as you are using the standard brew formula of 8.25g per 150mL of water, you can easily adjust to your needs. A minimum of five cups is needed per sample to ensure uniform representation of the coffee sample. Once all the cups have been weighed out, grind the coffee to a coarse grind and cover the top of the glass with a small sheet of paper (well return to this later).

Although not mandatory, it is common to have samples of both green and roasted coffee present on the cupping table during the actual cupping. This allows cuppers to visually inspect for any defects and lack of uniformity before the cupping process.

Now that the coffee is prepared, let's begin with the first step in cupping - assessing the coffee's "fragrance". Although "fragrance" and "aroma" are used interchangeably they are quite different. Fragrance refers to the olfactory characteristics of the dry grounds themselves, while "aroma" is in the wet stage. To asses fragrance, simply raise glass to your nose and deeply inhale the coffee's fragrance - being careful not to inhale any coffee grounds. Rate the coffee's fragrance along with any notes that you pick up on your cupping form.

The next step is to asses the coffee's "aroma". Before adding hot water, ensure that the water has reached a temperature of 92°-96°C (195°-205°F), as this will allow for proper extraction of all flavor compounds. Pour hot water into the cup and allow it to steep for 3-4 minutes - use a digital timer for this. Once the time is up, gently take your spoon and break the top layer of coffee otherwise known as the "crust". As you break the crust, place you nose as close to the top of the grounds and inhale - as soon as the crust is broken, it will release a large number of volatile compounds. Record your score on the cupping form.

Once recorded, continue stirring the coffee two to three times, allowing the foam to run down the back of the spoon. At this point the coffee will probably be too hot for most people to cup, wait another 3-5 minutes and allow the coffee to cool before proceeding. Using a rapid suction motion, aspirate the coffee over your tongue and write down your observation for every one of the ten parameters - see Table 1 above.

Even though great care is taken to select and process only the best beans at origin, mistakes do happen. And as such, the type and intensity of the defect can manifest itself in a number of different ways in the cup. Luckily, the SCAA Cupping Form allows for this assessment in two ways.

To determine the total number of defects, simply multiply the number of cups that contained the defect by its intensity. Record this total pointage, as it will be subtracted from the overall score (below).

Once all the parameters have been assessed, we subtract any defects that may have been present and get a Final Score. To classify the coffee based on SCAA standards refer to Table 2 below. 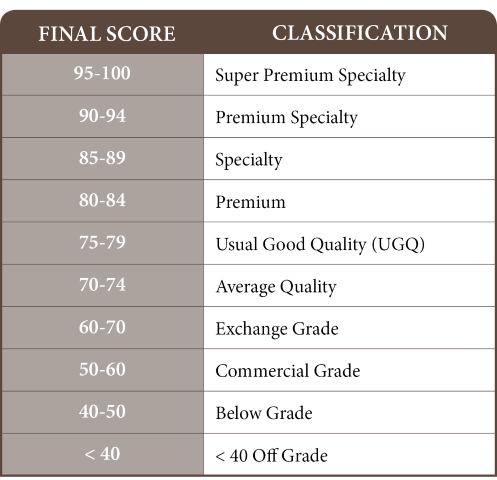 Although cupping may seem intimidating at first, with continued practice, the process will soon become second nature. For detailed instructions see the SCAA Cupping Protocol.

In addition, there are a number of books that will walk you through the basics of cupping. But perhaps your best resource is the SCAA itself as it hosts a number of training sessions during their annual conference.