The Chemistry of Organic Acids: Part 1

In the past two series of articles we briefly discussed a handful of important chemical components. This month we will zoom in organic acids and explore their role in flavor development in coffee.

Of all the organic acids in coffee, chlorogenic acids (CGA) are perhaps the largest and most important. In coffee, CGA can account for roughly between six and seven percent in Arabica and about ten percent in Robusta. Although this may not seem high, when compared to that of caffeine, it is seven to eight times higher in terms of relative concentrations.

It should be mentioned that the term ‘chlorogenic acid’ does not refer to a single compound, but rather a family of over half a dozen different isomers. Basically these compounds can be grouped into two main families, namely the mono-caffeoyl and di-caffeoyl acids. The mono-caffeoyl acids are simpler in structure and readily decompose during roasting, while the larger di-caffeoyl acids remain almost unchanged and have been reported to impart a metallic-bitter notes to coffee. It’s no surprise then why robustas, which typically exhibit harsher taste profiles, also contain corresponding higher amounts of di-caffeoyl acids than Arabica.

Interestingly, research suggests that in addition to caffeine, plants also use these harsh tasting di-caffeoyl acids as an effec­tive deterrent against insect attacks in the wild. 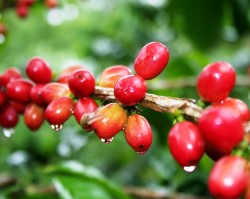 The exact concentration and type of CGA that a plant produces depends on a number of factors. Ultimately the exact composition of CGA varies greatly on the plant’s genetic makeup, species, variety, environment and level of maturation. Plants that have been exposed to harsher environments tend to exhibit greater concentrations of CGA than those grown at more moderate conditions.

CGA concentration is further complicated by the fact that recent changes in the environment, such those seen in ‘global warming,’ are expected to have an even greater effect on the plant’s overall composition and ultimately supply for years to come.

But although CGA’s development may be difficult to predict in the plant in the coffee roaster, CGA’s follow a more predictable mechanism. Thermal decomposition of CGA’s during roasting depends on a number of factors including: roaster type, airflow, time-temp, etc., but we can generally expect a fifty to eighty percent decrease in CGA composition with coffees of a medium to dark roast, respectively.

The decomposition of CGA’s during roasting brings about significant changes in sensory perception and can be easily observed when comparing coffees of varying roast levels. Of these two acids, quinic and caffeic acid, play a particular role and is generated as shown in Figure 1 below.

If you look closely, you will see that the reaction splits CGA in half and creates equal amounts of products (right side) in a one-to-one ratio. Meaning that for every mole of CGA that is broken down, we produce a corresponding amount of caffeic and quinic acids. These compounds, which are phenolic in nature, contribute to coffee’s astringency and lingering aftertaste. In espresso, for example, where we may want such attributes, these reactions may be desirable, but for others excess of these products can off-set the delicate acidity balance and have an overpowering effect.

In the end we may never know what exactly happens in the cup (or roaster), but it’s yet another example of how the coffee industry is still very much a science as it is an art.