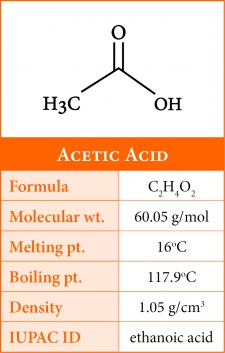 Acetic acid, or more commonly known as vinegar, is one of the many organic acids that play an important role in coffee quality. Although, there are varying levels found in both dry and wet processed coffees, its formation during post harvest processing comes primarily from fermentation.

During the wet process microbes in the environment will progressively metabolize  many of the 'sugars' found withing the coffee mucilage layer as the coffee sits ready for fermentation. Although many of these sugar will be metabolized to form a wide range of acids, alcohols and numerous to compounds, there is some studies to suggest that enzymes such as pectinase may also serve as another mechanism for mucilage decomposition during washed processing.

Since fermentation reaction is dependent on time and temperature, final concentrations of acetic acid in will vary depending on environmental factors as well as the nature of the bean. It's estimated that after fermentation only a small portion (0.01%db) of acetic acid produced during fermentation will remain within the bean. 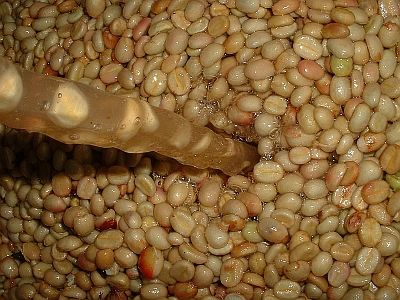 However, it is during the roasting process where the  formation of acetic acid significantly increases. During this stage small to medium chained carbohydrates like sucrose begin to breakdown, resulting in the formation of aliphatic acids such as acetic, formic and others.

Chemically, acetic acid is a weak volatile organic acid, but plays a significant role in both perceived acidity and aroma formation. According to Sivetz, a noticeable increase in acidity can be gained by the use of a pressure-roaster, which is believed to retain volatile acids and improve quality in lower quality beans.

Acetic acid is one of the four acids used for the Matching Pairs exam on the Q-Grader examination. If you are preparing for the Q-grader certification we highly suggest you practice using our organic acids kit before the exam.

More in this category: Phosphoric Acid »
back to top