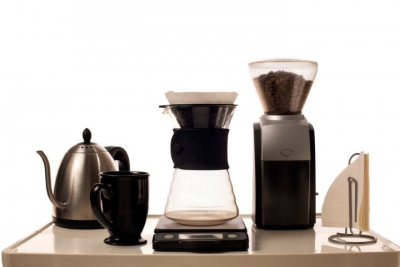 Unlike wine where the winemaker has complete control of the product up to the time of bottling, coffee requires that the consumers use a bit of their own skills during beverage preparation. This final step in coffee preparation is perhaps one of the most critical, since errors here can ruin the quality of the coffee and ultimately all the work that was invested into it.

We will discuss in more detail the many variables that affect the quality of the brew, such as time, temperature, weight, water quality, particle size, etc.

Fortunately much of the guess work in preparing a good cup of coffee has already been investigated by the Coffee Brewing Center (CBC) during the 1960's. Led by Dr. Lockhart, his research has become the body of knowledge in truly understanding the physics and science behind coffee brewing. 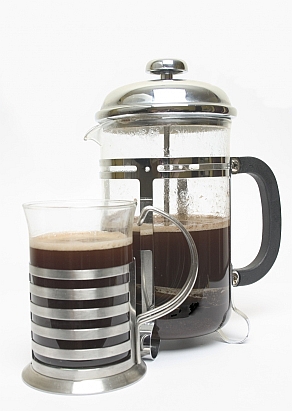 Before discussing the fundamentals it is important to define some basic brewing terminology - strength, extraction and brew formula.

Together these three variables make up the building blocks of what creates aroma, taste and body in coffee.

Much of Dr. Lockhart's work at the CBC was dedicated to the creation of the "Coffee Brewing Control Chart" which is still in use today. In essence, the brewing control chart provides a graphical representation of strength, extraction and brew formula in an easy to read format.

By measuring the soluble solids from brewed coffee relative to its brew formula, the CBC was able to graphically represent "solubles yield" given the amount of coffee to water ratio. As such, the work has provided the industry with the framework in which to discuss and compare coffee brewing standards.

To determine any one of these variables simply select a brew ratio (as depicted as diagonal lines on the chart) and beverage strength – and based on this extraction can easily be extrapolated from the chart. We will discuss this in greater detail below, but for now, one important thing to remember is that, according to the CBC, the best cup of coffee is obtained when approximately 18-22% of the flavoring material is extracted from the bean. As such, this infusion would represent a beverage with a corresponding strength of 1.15-1.35%. When both these factors are met, the beverage is said to be at its "Optimum Balance" and is depicted as a grey box in the center of Brewing Control Chart. 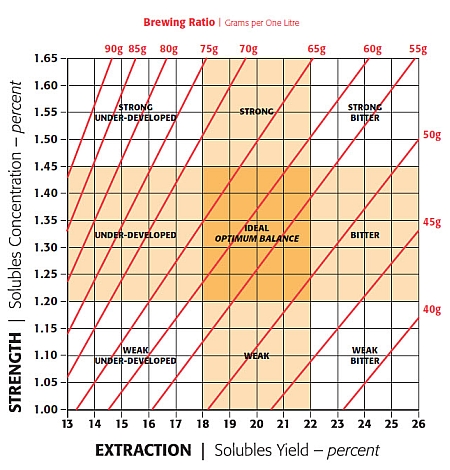 Luckily, strength measurements can be made relatively easily using a number of different instruments. The most common include the use of hydrometers, conductivity meters, brix meters and moisture microwaves.

Portable TDS or total dissolved solids meters are a great tool since they are relatively cheap and can be used to not only test the coffee solution, but the water as well. For all practical purposes, a TDS meter is just a customized conductivity meter that relates the amount of coffee flavoring material based on its conductivity across a solution. For example, a reading of 1800 TDS refers to corresponding flavoring material content of 1.8% and 98.2% water on the Brewing Control Chart.

When looking at the composition of the coffee bean, approximately 28% of the organic material water soluble, while the remaining 72% consists of insoluble cellulose that holds the bean together. Upon the addition of hot water much of the soluble material is readily dissolved in solution to extract important flavor and aroma compounds.

As shown in Figure 2 below, a 20% extraction (shown at the bottom of the chart) indicates that 20% of the soluble flavoring material within the bean was extracted into water.

For example, if 10 grams of ground coffee was used in brewing, the bean would have lost 2 grams of soluble material to water. Because the rate at which these soluble compounds dissolve vary, changes to grind, water temperature, brew time, coffee weight and brew equipment will invariably produce vastly different beverages. For example extractions below 16% produces a beverage with a weak peanut-like flavor, while extractions over 24% producing over-extracted bitter characteristics. We will discuss these issues later in a separate section.

For now, the key is to brew coffee within the "Optimal Balance" having 1.15-1.35% coffee flavoring material.

Although it may seem intimidating at first, using the Coffee Brewing Control Chart will provide for the basic groundwork in which to ensure consistent beverage preparation.

More in this category: The Chemistry of Brewing in your Cup »
back to top