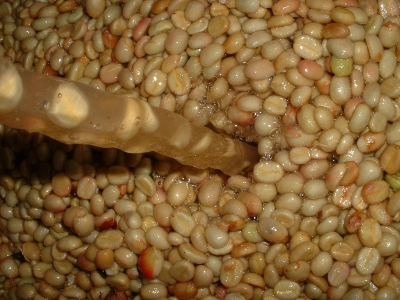 In this section we'll briefly discuss the wash process, provide a basic overview, and discuss the nuances of each step.

Separation is the first step that the cherry undergoes on its journey from raw material to green bean. In this first step, all the coffee cherries are dropped into a large containers - the size of a typical swimming pool - to allow for initial separation of the cherry and foreign material.

Items that are less dense than water float to the top and typically consist of leaves, sticks, and other debris. In addition to physically separating debris, this step also serves to improve quality by separating the less dense immature beans, typically yellow/green in color, from the fully matured red cherries. The photo below shows a typical separation tank with both immature (yellow) beans and foreign material to be siphoned off from the rest of the batch.

These lower density immature beans are typically inferior in quality and referred to as "floaters" by many specialty coffee roasters. In many countries it is this coffee that is typically sold to the locals for internal consumption, allowing for the better coffee to go to consuming countries.

Now that only ripened beans have been separated out, the next step is to remove the outer pulp from the cherry. In this stage, beans are pressed between rotating cylindrical screens that physically strip away the outer layer. This process is typically performed with one of two types of depulpers: hand operated and motorized.

Although most depulpers are motorized, smaller farms tend to employ more traditional hand-operated depulpers, as seen from the pictures below. Once depulped, the coffee will still have a layer of sticky mucilage layer, that will be removed in a subsequent step.

On larger farms that require a much larger volume of coffee to be processed, the hand pulper is too limiting and the use of motorized depulpers are typically used (see video below).

Now that the beans have been removed of the pulp, there still remains a sticky mucilage attached to the bean. In order to effectively remove this sticky mucilage, the use of fermentation is used.

Since the mucilage layer contains a higher concentration of moisture, sugar and pectin, it provides a conducive environment for fermentation for the surrounding yeast and bacteria in the environment. This controlled type of fermentation is done in fermentation tanks, where the conditions are constantly monitored to ensure proper processing.

As fermentation processes proceeds numerous acids including acetic, lactic, butyric, etc are created, which significantly drop the pH of the surrounding solution to create acidic conditions within the tank. These acids are believed to 'eat away' the sticky mucilage layer, which eventually comes off the bean. Depending on how long the beans are allowed to ferment will ultimately affect their quality.

Typically, the coffee is fermented anywhere between 12-36 hours, but the actual time depends on a number of factors discussed below. In the end, it is really up to the experience of the coffee farmer to decide when the coffee is done and ready to go to the next stage of processing. 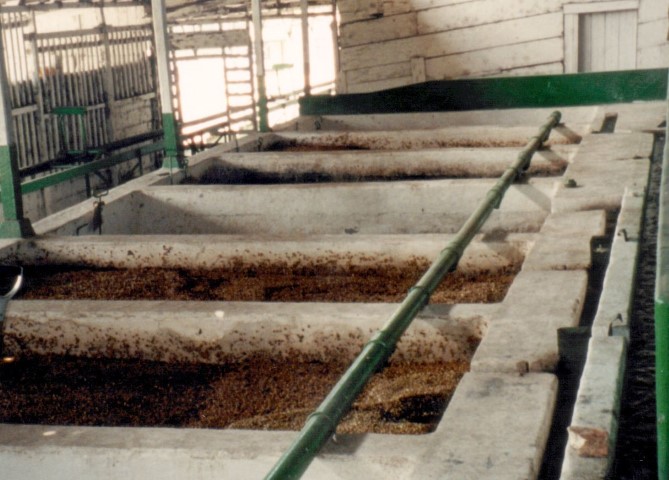 The total time that the coffee sits fermenting depends on numerous factors, such as degree of cherry maturation, ambient temperature, altitude, and dozens of other factors. Typically, those farms at higher altitude (due to cooler temperatures) require more time in the fermentation tank than the ones at sea level. Depending on conditions, the beans can be fermented for 12-36 hours, or until the mucilage easily tears away from the bean.

In general, coffee processed by the wet method generally has a cleaner cup and higher acidity than the dry processed. As such, coffee usually tend to fetch a higher price due to the increased amount of labor associated with it.

More in this category: Natural Processed Coffee »
back to top